The sacred abode of Goddess Yamuna is nestled near the foot of Kalind Parbat on a side of Banderpoonch Parbat It is believed that the Yamunotri temple is built by the king of Tehri, Naresh Sudarshan Shah in the year 1839. It is one of the Chota Chardham pilgrimage sites. The Yamuna river is gushing down from one side of the temple. The Yamunotri Temple holds Goddess Yamuna in the form of a black marble idol. Ganga Devi also finds her place in the form of white stone by the side of Yamuna. The temple closes its portals as the winter season arrives on Yama Dwitiya that is the second day after Diwali or on Bhai Dooj. Goddess Yamuna is taken to Kharsali village in the winter season in a palanquin and remains close entire winters. The goddess Yamuna comes back to the Yamunotri temple on Akshaya Tritiya that is April/May. Both the closing and opening ceremonies of the Yamunotri shrine are brought about with grand celebrations, elaborate rituals and Vedic chants.

According to the mythology Yamraj, the brother of Yamuna bestowed a holy boon to her on the auspicious day of Bhai Dooj that whosoever will take a dip in the Yamuna river at Yamunotri Dham will attain salvation and will thus have freed oneself from being taken to Yamlok.

Planning for Chardham Yatra? Here is the list of Chardham yatra package, customize your package with ChardhamYatraTrip.Com

Yamunotri Dham temple seats Goddess Yamuna and is located at a 5km trek from Jankichatti. It is situated on the bank of the holy river Yamuna. Gomukh, the source of the holy river Ganga is located in Gangotri Glacier at a trekking distance of 19km from Gangotri town. Motorable roads end at Janki Chatti and from here one needs to trek to reach the temple. Plan a trip to visit this beautiful sacred temple from April/May to June and September to October/November. Strictly avoid the monsoon season as at this time it is risky due to landslides, floods. Low temperature and heavy snow make the winter season the most inappropriate season for the devotees.

Paying a visit to the holy Yamunotri temple is an integral part of the popular Chardham Yatra in Uttrakhand tour. This temple is devoted to goddess Yamuna. Every year numerous pilgrims visit the Yamunotri temple. Yamuna Devi assumes great religious importance for Hindus. The pilgrims believe that by worshipping goddess Yamuna they can also please and get blessed by Surya Dev, Yama and Sugna Devi.

Yamunotri Yatra by helicopter is the easiest and perfect way to pay a visit to the Yamunotri temple in a short time. Helicopter tour is good for those who have a shortage of time and for those also who are facing health issues and are not able to perform pilgrimage relatively quick. The helicopter operates from Sahastradhara, Dehradun helipad every morning for the temple and returns to the city every evening. You will depart from Sahstradhara helipad, Dehradun, and will be arriving at Kharsali. There you will be escorted to the Yamunotri by Palki. After the Jal Abhishek and VIP darshan, you will be heading back to Sahastradhara, Dehradun with some good memories.

Places to visit in Yamunotri 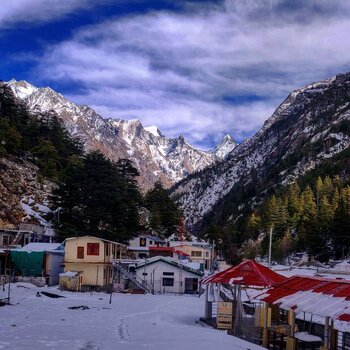