Haridwar is the holy city of Uttarakhand which is also referred to as the Abode of God. This place will make you fall for the positivity and serenity of this place as here you will be hearing the continuous Mantra chanting and the sound of Temple Bells. If you want to learn more about the culture of India then this Haridwar trip Package is perfect for you. it is one of the four places where Kumbh Mela is celebrated at an interval of 12 years. The prominent attraction of the Haridwar tour Package is Har-ki-Pauri where the holy water of the river Ganga flows and the crowd of devotees gathers here during the evening and morning Aarti. Haridwar is also the primary Centre for the holy pilgrimage Yatra of Chota Char Dham which is located in the Garhwal region of Uttarakhand and other than that it remains completely crowded during the July month when the Kanwa Yatra is organized and Devotees travel to this place to carry the holy Ganga water and travel hundred of Miles being barefoot. Chandi Devi temple is located on Neel Parvat which is also known as the Siddh Peeth and was constructed the year 1929 by the ruler of Kashmir named Sachit Singh but the foundation was laid by Guru Adi Shankaracharya.

Mansa Devi temple is located on Bilwa Parvat and is dedicated to the goddess this temple was constructed in 1811 by king Gopal Singh of Mani Majra. It is believed that if you visit this Temple your wishes may come true. Har ki Pauri is the prominent attraction of Haridwar daily morning and evening Ganga aarti is performed. Some of the famous festivals like Kumbh Mela and other Holi stands are organized at this Ghat.

Bharat Mata Mandir is the temple that is dedicated to Mother India and is located on the banks of Sapt Sarovar this temple is having eight stories that narrate the story of how India was formed. This temple was initiated by our late Indian Prime Minister Indira Gandhi in the year 1983.

Daksh Mahadev temple is located at Kankhal and is dedicated to goddess Sati and Lord Shiva and the sample is named on the name of father of goddess Sati that is King Daksha Prajapati. This temple is widely visited by the devotees during Sawan month.

Things To Do In Haridwar Packages The activities that can be done with this Haridwar pilgrimage tour Package is the most famous Ganga Aarti at Har-ki-Pauri which is organised daily in evening and in the morning. You can also enjoy the ropeway ride to Mansa Devi and Chandi Devi temple which are located opposite to each other. Other than this one can also take the spiritual bath in river Ganga at Har ki Pauri Tu to make themselves free from any kind of sin. You can also enjoy the jungle safari at the chilla range of Rajaji National Park in this Haridwar Package itinerary. One can also enjoy meditation and yoga in the spiritual environment and on the bank of holy river Ganga. You can also take the temple tour of Haridwar as there are several temples that are dedicated to to Hindu devotees and I are having their reference in the Hindu mythology. The peak season to explore this Haridwar tour Package is from March till June month as the temperature remains a bit warm so it's the best time where you can take a dip in the holy river Ganga. Other than this during the summertime, there is various festival that is organized at Har-ki-Pauri Ghat. During the winter months, you can explore all the temples as the temperature remains pleasant and cold. During the monsoon month, the place becomes quite risky as due to heavy rainfall the water level of river Ganga Rises so it is not permissible to be in the proximity of this river. Haridwar welcomes each of its tourists with chimes of bells and also chanting of mantras b.... Haridwar is such a place that has Panch Tirth means five pilgrimage places as per the Hind.... Haridwar is truly a land of God as there are various sacred temples that are located in pr.... Haridwar is also referred as the gateway to God and is having its mentions in the ancient .... 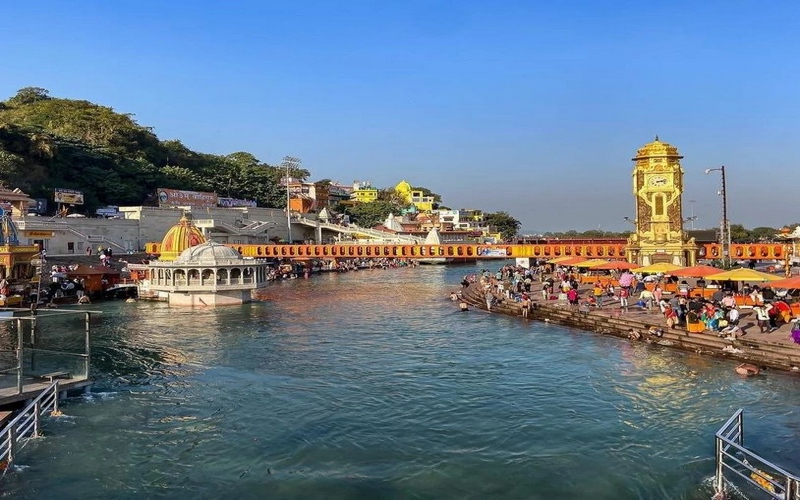 Haridwar is also like a gateway to the Chota Char Dham of Uttarakhand which is located in .... The most prominent and auspicious activity that happens and Haridwar is Ganga Aarti which .... Ganga artist main highlight of Haridwar and the Kumbha Mela which is organized once in 12 .... Haridwar is the religious city of Uttarakhand which is situated on the bank of holy river .... Haridwar is not only famous for The Spiritual aspect but one can also enjoy the wildlife i.... There are 7 holy cities in India and Haridwar is one among them which is located in Uttara.... Haridwar is an important pilgrimage Centre which is located in the Northern state of India.... Haridwar is having narrow lanes that are dotted with the different ashrams and Hindu templ.... Haridwar is one of the prominent place where your soul can be in the quest of peace and sp....